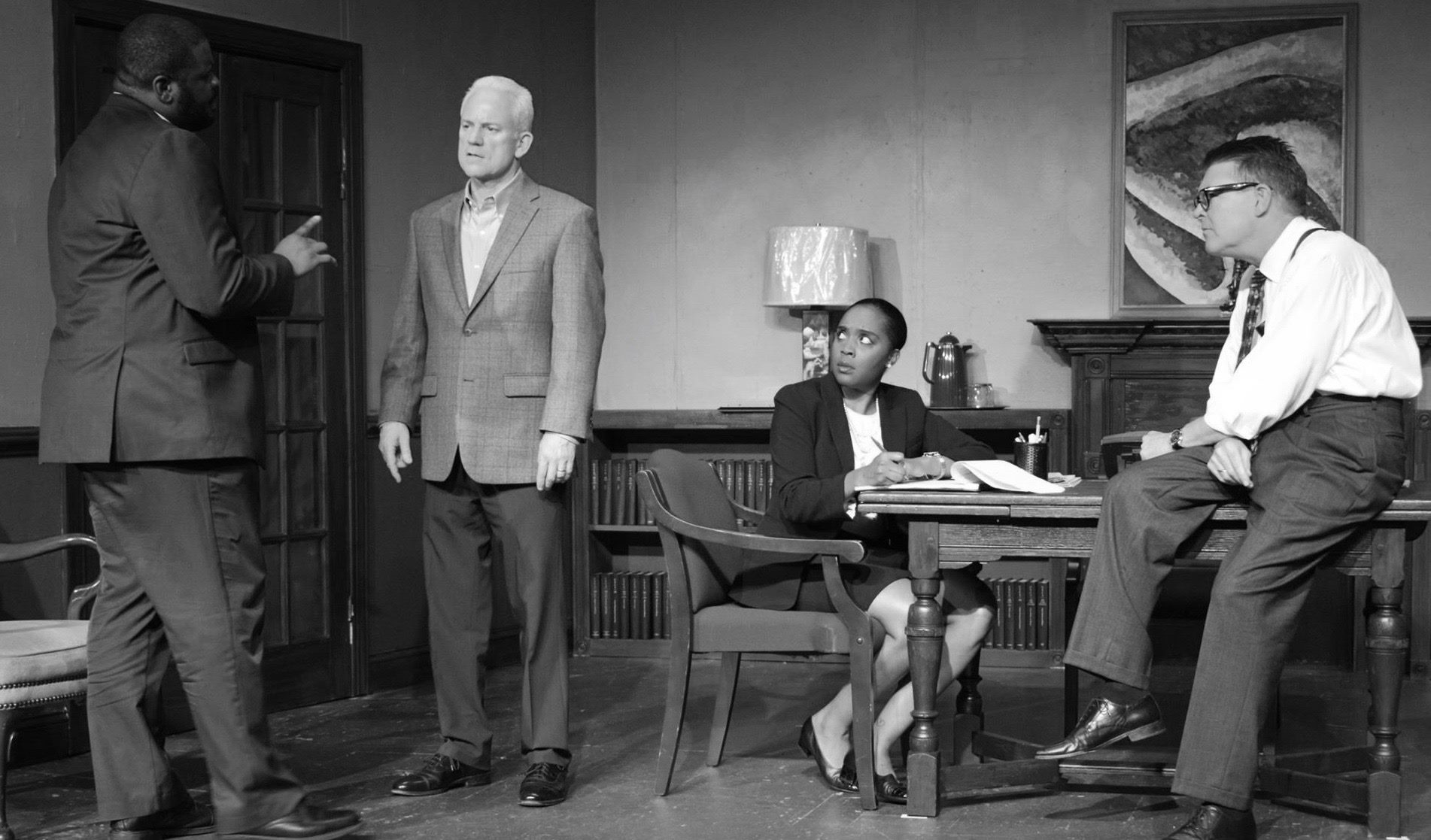 When it comes to the question of race, our 200-year national theater has gone full circle. After a long history of ignoring the role race plays in American life, modern day theater is now preoccupied with its importance. In “Race” (2009), now running at Stagecrafters, playwright David Mamet tosses his penny into the pond.

The plot is stereotypically simple. Charles Strickland, a wealthy white man, stands accused of raping a young black woman in a hotel room. The law firm of Lawson and Brown struggles to decide if it wants to accept the case. Evidence to support Strickland’s guilt and innocence is uncovered, and along the way attitudes about race are laid bare. 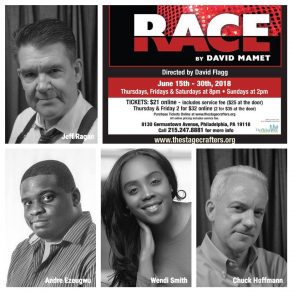 Stagecrafters veteran Jeff Ragan gives the show much of its life. Playing the role of Jack Lawson, a conflicted white lawyer, Ragan masters Mamet’s staccato, confrontational patter. Jack is a complicated person. Though he operates on the cynical view that you only take cases you can win, this gamester also harbors positive beliefs he himself is reluctant to recognize.

As the lawyers puzzle over the question of Strickland’s guilt, hidden ideas about race on the part of Jack and his two black associates also come into the open. Andre Ezeugwu plays law firm partner Henry Brown, a veteran lawyer who is both jaundiced and full of good will. Wendi Smith plays Susan, bringing an air of ingenue to the young intern. While Charles Hoffman turns Strickland into such a punching bag, you tend to sympathize with the accused.

Director David Flagg’s impressive stage (set design and set decor, Maria Nappo) embodies the contradictions and ambiguities of the lawyers. Reference bookcases flank a fireplace with perfect symmetry. But over the mantel an oil painting with mysterious, shapeshifting figures is like an evil eye, casting doubt on the vision of orderly justice.

The Stagecrafters production holds your attention. The script is a bit mannered, a string of one-upmanship scenes. Sometimes, a little plot twist is milked to the max: “You said what! … (dramatic pause) …You said what!” Still, director Flagg’s brisk pace, along with his set and strong acting, keep you engaged.

It is a stretch to think “Race” adds much to the national dialogue. As the play hurries to its end, each unpredictable plot turn serves to expose some attitude about race that a character has been hiding. Yet none of these discoveries is especially remarkable or affecting.

The Stagecrafters show succeeds at the level of mystery story. “Race” is suspenseful. But on the message, race relations side you have heard all this before. I came away with the sneaky feeling that “Race” is cashing in on current theatrical trends and that, like his lawyer Jack, Mamet is taking a case he knows he can win.

Stagecrafters is located at 8130 Germantown Ave. “Race” will run through June 30. Tickets available at 215-247-8881 or www.thestagecrafters.org.

← Prev: Andre Ezeugwu Named A Future Leader In Radio Sex, guilt and race all factors in thriller on Hill stage →