RACE Opens Eyes and Minds at The Stagecrafters Theater 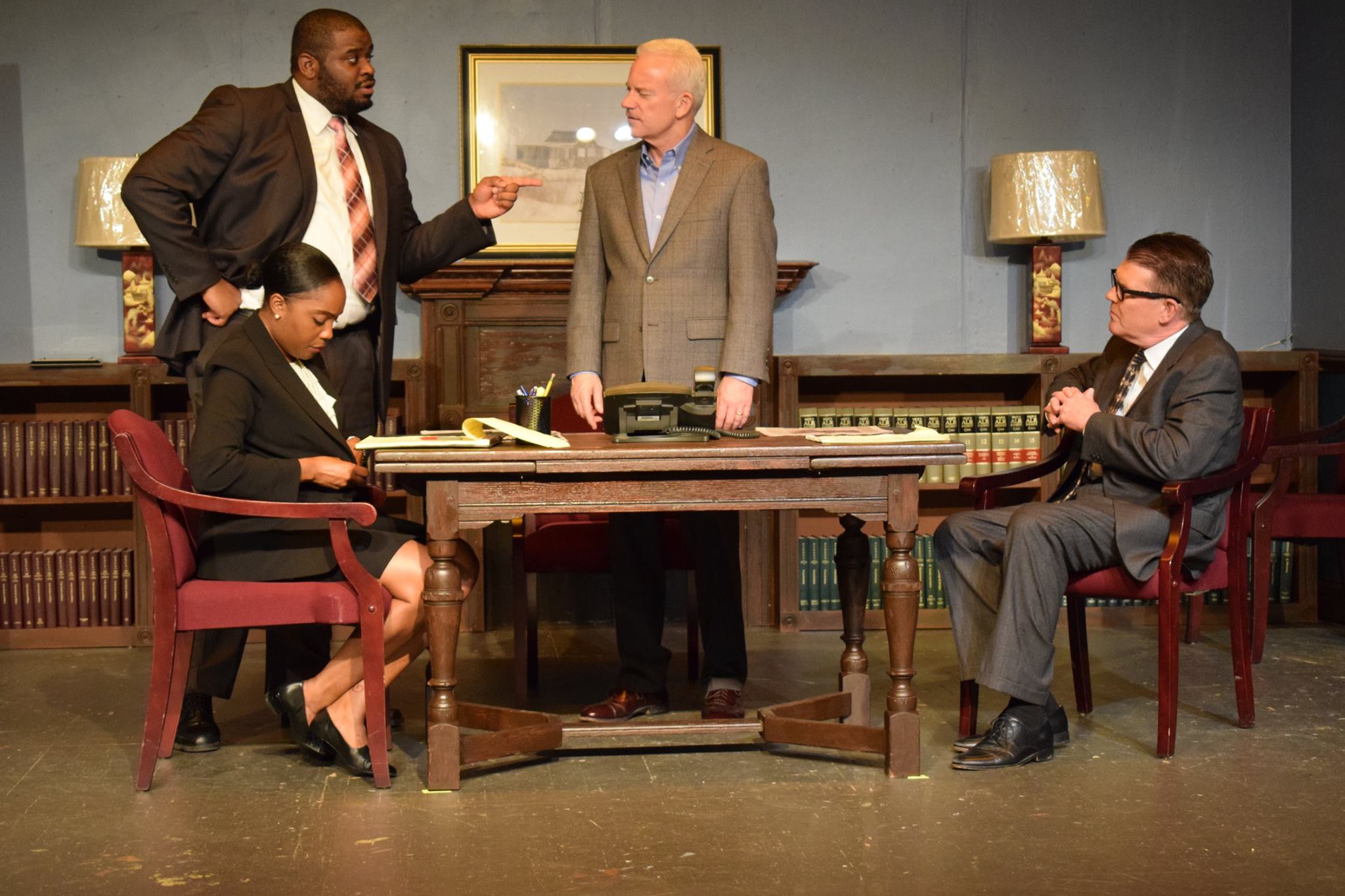 By: Ginger Agnew
B SHARP’S STUDIO 6
When mounting a play written by one of America’s predominant playwrights, David Mamet, it is imperative to assure the artistic team is true to the author’s intent. With RACE it is tricky to 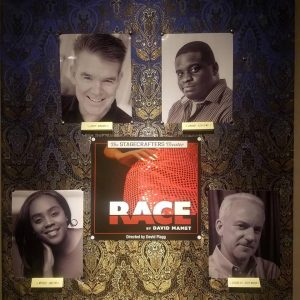 distinguish what is and is not true, but the production at Stagecrafters Theater is true to the script. The difficulty is to decide what is right and just. The action takes place inside the well appointed room of a law firm’s inner sanctum. The team discusses the case and decisions are made as to whether to take on a client accused of rape. Once the determination is made, the case is dissected, as is the nature of the strategy for winning. The guilt or innocence of the client is secondary to the conversation. Prominent in the storytelling is the relationship between the lawyers, the client and accuser, and the way that race plays into all of those relationships. RACE is a biting, fast-paced hard look at a struggle that permeates the American landscape.
Each member of the small cast is authentic and breathes life into a character who has a strong and believable point of view. While the motives seemingly shift, and tensions definitely shift throughout, each player brings presence and believability to their role. As one partner in a law firm Jeff Ragan plays Jack Lawson, a Caucasian lawyer who seems to be in charge of the firm. Lawson brings to light the dichotomous thinking and actions of a 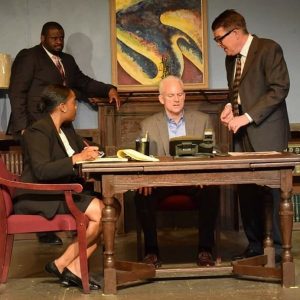 man who is gifted with white privilege but doesn’t realize when he is using it to his advantage while usurping the rights of those surrounding him. It sneaks insidiously into his attempt at winning the case at all costs. Ragan’s character is likable at the outset but sinks into a quagmire of his upbringing. The character arc is clear, deliberate, strong, and startling while the character deteriorates before the eyes of the audience and his co-workers. Andre Ezeugwu portrays Henry Brown a senior partner in the firm, and a black man. Nobody is left to wonder about the strategy of having a man of color on the team. The accused seeks out the firm for that very reason. Ezeugwu is also likable as the conflicted and never complacent counsel. Brown blows holes in the stories that are told by everyone around him. Ezeugwu takes on the tricky role of the omniscient with dignity and strength. When his character is standoffish or angry, Ezeugwu’s choices create exactly the atmosphere of doubt that is his frustration and his strength. Wendi Smith is Susan, a recently hired young lawyer fresh out of an Ivy League law school. Smith’s character arc is the screw that turns the story. Smith begins as a quiet and agreeable associate. The fact that she is a woman of color is not lost on the partners, the client or the value of the story. Smith creates a character who is a girl exploding into womanhood. The nature of the crime becomes too real for the character and Smith plays a brilliant hand of poker. Charles Hoffman portrays Charles Strickland who is accused of the crime. Hoffman makes sure the character is everything it needs to be to balance the action.
Compelled to think about the nature of race relations, how crimes are committed, rationalized, defended, and solved is at the core of the story. At the heart of the story one questions the who, why, and how of the perpetrator, and the way we rationalize our own actions. The set is impeccably built and decorated. Costumes are just right to help tell the story. David Flagg’s direction tells the story clearly but allows plenty of room for the audience to think and then continue the discussion.
RACE By David Mamet
Directed by David Flagg
The Stagecrafters 8130 Germantown Ave. Philadelphia, PA 19118
June 15-30, 2018
Info: 215-247-9913 www.thestagecrafters.org
READ MORE
← Prev: Sex, guilt and race all factors in thriller on Hill stage E-RACE-ing One’s Indiscretions—Mamet Onstage in Chestnut Hill →