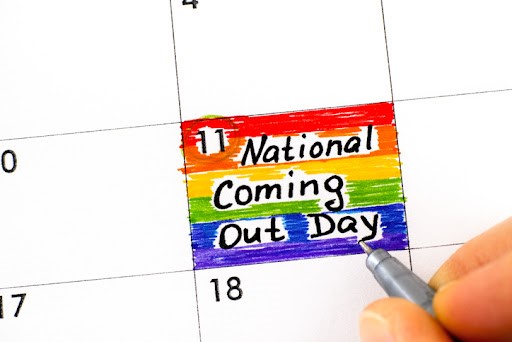 Did you know yesterday, October 11th was National Coming Out Day? For many young adults, coming out publicly can be one of the hardest life challenges. There is the constant worry, What will my mom, dad, brother, sister, grandparents, friends, teachers think or say?

“Today, we celebrate National Coming Out Day and the courage of LGBTQ+ people who live their lives with pride, create community with open arms and hearts, and showcase the strength of being your authentic self. Today and every day, I want every member of the LGBTQ+ community to know that you are loved and accepted just the way you are – regardless of whether or not you’ve come out.”

Within Joe Biden’s own administration is Mayor Pete Buttigieg, Secretary of Transportation. Not only did Mayor Pete shatter a glass ceiling by being the 1st openly gay cabinet member in a US president’s administration, he and his husband Chasten also welcomed two adopted twins,  Penelope Rose and Joseph August, into their family.

Mayor Pete also served from 2009 to 2017 as an intelligence officer in the United States Navy Reserve, attaining the rank of lieutenant. He was mobilized and deployed to the War in Afghanistan for seven months in 2014 and was quoted as saying, “People who got into my vehicle to serve their country didn’t care if I was Republican or Democrat, straight or gay.”

Mayor Pete hasn’t been the only one whose shown immense bravery in adverse situations. In a conservative Oklahoma community, one dad, John Wyatt, supported his gay son named Caden with a Pride flag outside their home. The flag-hanging moment with Lady Gaga’s “Born This Way” playing in the background was captured on TikTok and received over 1 million views and 400,000 likes.  In the past, John was not supportive of the LGBTQ community due to his conservative and religious views, Buzzfeed reported. That all changed when he and his wife realized early on that Caden might be gay.

“That’s when we really started embracing [the community], because we knew our son was gay, and at any time he could come out,” John told Buzzfeed.

Making in-roads to coming out has even made its way into DC Comics as they announced that Jon Kent, the son of Clark Kent and Lois Lane, will be the “Superman of Earth” and become romantically involved with reporter Jay Nakamura in an upcoming issue of the series “Superman: Son of Kal-El.”

Sports athletes have become more comfortable with coming out. Going back to 1981, women’s tennis star Billie Jean King was outed as a lesbian and defied her publicists who told her to deny the claim. She said, “I’m going to do it. I don’t care. This is important to me, to tell the truth.'”

Yet, despite the in-roads and progress, we have made, the United States has proven it can better represent LGBT +women and LGBTQ+men in the general workforce. According to a 2019 William Institute, UCLA School of Law, and McKinsey study, LGBTQ+ women and men struggle at every stage of the management pipeline with very low percentages of making it even entry-level.

Joe Biden said on National Coming Out Day yesterday, “Despite the extraordinary progress our nation has made, our work to ensure the full promise of equality is not yet done. Anti-LGBTQ+ bills still proliferate in state legislatures. Bullying and harassment — particularly of young transgender Americans and LGBTQ+ people of color — still abound, diminishing our national character.”

We want to hear from you, our readers: What do you think we can do in our communities to promote full equality and provide great opportunities to all Americans regardless of their sexual orientation?

← Prev: 10 Black Facts: Authentic Marketing and PR to African-Americans WENDY’S BLASTS MCDONALD’S AND OFFERS A GUARANTEE FOR ITS NEW FRIES →

The page you requested could not be found. Try refining your search, or use the navigation above to locate the post.