David Mamet has become a fixture on the American theatre scene since 1976, when he first received acclaim for a trio of off-Broadway plays: The Duck Variations, Sexual Perversity in Chicago and American Buffalo. He won a Pulitzer Prize and received Tony nominations for Glengarry Glen Ross (1984) and Speed-the-Plow (1988). A founding member of the Atlantic Theater Company, Mamet was inducted into the American Theatre Hall of Fame in 2002. His staccato dialogue has an edge to it and is known for being laden with obscene words. RACE is no exception.

The play had its New York Broadway debut on November 16, 2009 and ran until August 2010, under the direction of Mamet himself.  In interviews, the author stated that play’s “theme is race and the lies we tell each other on the subject.” Wealthy businessman Charles Strickland has been charged with rape based on accusations by a young black woman. Insisting he’s innocent, Strickland 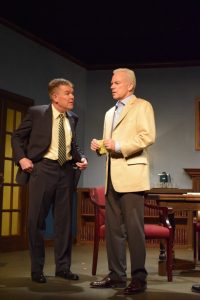 quickly enlists his friend Jack Lawson, a well-known criminal attorney to defend him. Lawson agrees only after he determines the case is winnable, enlisting new-hire Susan (who happens to be black) to assist he and his partner Henry Brown (also black). The lawyers focus on the flaws in the police reports—primarily the statements of the hotel manager and the maid. All three lawyers become convinced that the credibility of the reports cannot withstand questioning in the courtroom and feel that their client will be exonerated. Soon, however, things begin to unravel…

Director Flagg has gathered a solid cast: Wendi Smith is a measured Susan, leaving the viewer uncertain what her feelings are until the end. Ms. Smith imbues her with youth and righteousness, wanting justice to be served. Andre Ezeugwu is bombastic as attorney Henry Brown, yet he manages to hint at an altruistic aspect to this man. Charles Hoffman has the thankless role of Charles Strickland—a typical male who just doesn’t see what the issue is. Hoffman handles it well, getting the viewer’s sympathy initially. As shark/lawyer Jack Lawson, Jeff Ragan captures all the qualities we’ve come to associate with a criminal attorney—the truth isn’t important, it’s can we win. Ragan spits out Mamet’s dialogue with relish.

Flagg’s direction, assisted by Jen Allegro, is tight, revealing each of the three scenes smoothly, pulling the audience in. The action unfolds on Maria Nappo’s wonderfully succinct set that instantly evokes the conference of many a law firm. Gilbert Todd lights everything appropriately, Bill Bansbach’s soundscape sets the perfect mood. Susan Flagg costumes the cast in just the right corporate looks.

The acting, directing and technical aspects are all strong, I’m just not sure I care for the play. In his directorial note, Mr. Flagg says RACE is a play about “change and the lack of change in our country.” He also feels it asks the question “How many times can a man turn his head and pretend he just doesn’t see.” Race has been a hot-button topic in this country for ages; it was lurking in the nation’s underbelly for quite some time, the controversial candidacy of Barack Obama brought it to the fore. The candidacy and election of Trump seemed to “unleash the Kraken” as it were. White supremacists, misogynists and homophobes now feel entitled to spread their hate.  So much has changed since 2009, when RACE was written, that I feel it misses the mark now. One watches as these two experienced attorneys—and one freshly-minted one—hash out the semantics and minutia of the case. The fact that the victim is African-American isn’t totally germane. The real problem is the cluelessness of the accused. Mamet’s works are so testosterone laden that the rape of a young woman tends to get lost in the shuffle of the story. Mamet uses the crime as a means to an end as he has the lawyers spinning the story to their client’s advantage. In this age of #MeToo, it’s off-putting.

Mamet seems to glory in crude, rough “maleness.” He seems to be of the “boys will be boys” ilk. It is a well-known fact that he hates political correctness, and his writing reflects that more and more. And yet, many in American theatre think he is one of the greatest. The bloom is off the rose for me at least.

That having been said, Stagecrafters has mounted a robust production, utilizing four excellent actors. If nothing else, the viewer is left thinking…

WHEN YOU GO: The Stagecrafters Theatre is located at 8130 Germantown Avenue in the Chestnut Hill section of Philadelphia. The theatre is fully handicapped accessible, but parking is not permitted on the property. Patrons with mobility issues may be dropped off at the venue’s door. RACE continues this weekend, with performances as follows: June 23 @ 2pm** and 8pm; June 24 @ 2pm and June 28, 29, 30 @ 8pm 2018. The running time is 1 hour and 45 minutes, with a 15-minute intermission. Information and tickets are available by either visiting the theatre’s website @ www.thestagecrafters.org or by calling 215-247-9913.

Previous RACE Opens Eyes and Minds at The Stagecrafters Theater
Next Looking for an apartment? This startup has you covered